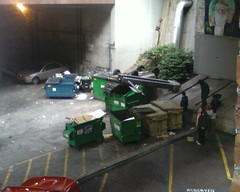 Car fell off the viaduct at 1st and Seneca. Emergency responses are getting the driver out right now. Holy crap it was so loud when the car fell.
So I'm sitting at my desk and all of a sudden I hear, well, the sound of a car going over the railing at 1st & Seneca, and under the viaduct:

So I was driving into work this morning, and right before the "Car vs. Viaduct" accident happened, it looked like half the City's rescue resources were outside of Real Networks. The cops had shut down Elliott Ave, between Broad and Vine (stringing Yellow Tape between the signal posts). I saw at least 3 ambulances and fire trucks, 4-5 cruisers, and there were where over a half dozen motorcycle cops coming up Alaskan and turning up Vine. The Seattle Fire&Rescue Page just has it listed as a "Heavy Rescue". Just wondering if anyone knew what was going on over there.

EDIT: I just walked down there, all the rescue vehicles are gone, and they are letting ppl get closer (gotta get to work you know). The street is still closed off, and the car and all it's bits are still there. It looks like a dark buick hit the side of the building, and then got itself wedged between a Telephone pole and a tree. It's a compact car now, probably gonna have to pull that sucker out sideways. Sorry, no pics =(
Seattle firefighters responded to two car crashes less than a mile apart in downtown Seattle this morning.

Medics performed CPR on a man as they took him to Harborview Medical Center after he apparently lost control of his vehicle and slammed into the RealNetworks building at 2601 Elliott Avenue around 10:13 a.m., said Helen Fitzpatrick, a spokeswoman for the Seattle Fire Department. The man was unconscious when he was pulled from his vehicle, she said.

Less than 20 minutes later, medics were called to the intersection of Western Avenue and Seneca Street, where a car had fallen 20 to 25 feet from an overpass, landing on its roof and partially in a Dumpster, Fitzpatrick said. The male driver did not appear to be injured but was taken to Harborview as a precaution, she said.

Fitzpatrick could not say if either crash was weather-related.

From the Seattle Times. (I know both stories have been discussed in the community).

I have checked memories and went to the landlord tenant website.. but dont see my questions answered.

I have a relative that needs to stay with me for less than 30 days.. my landlord wants to charge me for his stay.. he will not be using a parking place.  Arent you allowed to have guests? .. I know in California it cant be for more than 30 day as that is considered legal residency.  Thanks for your help.

It just took us nearly an hour to get from First Hill/Capitol Hill to Fremont because a ton of streets up there and around the area are blocked off.  Does anyone know what's going on?

What is a good date destination about 20 minutes north or south of Seattle? I'm teaching my friend to drive stick shift, and we're ready to graduate him to the highway. But I thought it would be fun to actually have somewhere we're driving to- something interesting to visit, or just a really quirky place to get food.

I already checked City Search, but almost everything was within city limits, and the whole point is to get him on the highway.

Not sure if it is still blocked but was about 315, Denny and Mercer at the Shell station was blocked off due to a police car rear ending someone then sending them into someone else. The buses were stopped for a while and then being rerouted. I didn't see any coming down first (15 and 18) on my walk down from Queen Anne.

My knitting fell out of my backpack as I walked home to avoid the mess that is the busses this evening. It's somewhere between the University Bridge and Ravenna Boulevard where it crosses 12th ave NE. I walked up 12th in that area, so if you or anyone you know finds two knitting needles with about 2 square feet of navy blue knitting (it's the front of a sweater, so it's ribbed, then has a herring-bone sort of pattern, and I just started binding off the arm holes) on them, please contact me here. TELL YOUR FRIENDS, TOO.
At least for the past hour and lord knows for how much longer, all the electric trollybuses that use 3rd Avenue have not been running. This is the 1, 2, 3, 4, 13, 36 and anything else on the wire, I guess.

Also, the sidewalks are icy and I want a hot chocolate. Wah.
THIS JUST IN: MATT HASSELBECK CAN'T THROW A TOUCHDOWN.

I checked google and the memories (everything on google was REALLY old), but didn't find what I was looking for.

I'm looking for a semi-local pet rat breeder. Specifically looking for hairless rats, but others would do too. I refuse to buy rats at a chain store, because you don't know what they could have, and they don't have the temperment and handling that breeder rats have.

I was requested to post this here. This was early on in the game. Which we won. Go Hawks. 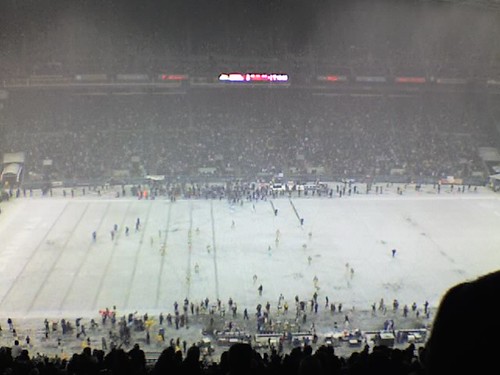 In case anyone cares or is heading that direction...accident on the Ballard bridge, you have to detour heading south (heading towards Seattle) as it is closed starting right at the exit to Leary. You can get around it by taking that exit and then just go straight through and back on.

It's icy out there peeps! Be careful!
Collapse