My name is Wendy and I am from Austin, Texas. I am looking to move to the Seattle area in the near future. I need a change of scenery, and I figured what better place than Seattle. Anyway, I am wondering if you could clue me in on the good parts of town are and areas to avoid as well as good and bad apartment complexes. I currently work for Best Buy, so I will probably transfer to a store up there, so I'm looking to live somewhere near where I work. I am not looking to spent a great amount on rent. I would like to have something relatively nice and in a safe location for under $600.

We're taking the ferry from Port Angeles to Victoria BC soon, and we're bringing our 2 dogs with us. I was told by the ferry people that all we need for the pups to go into Canada is a copy of their rabies certificates, which we do have.

I was at my vet yesterday and one of the receptionists mentioned that she has known a couple of people that have been turned away from the boarder for not having a health certificate accompanying the dogs, eventhough that's not stated anywhere as a need to have.

Has anyone brought their dogs over to BC and what did they have to show to get the dogs in?

Have you ever heard of Improv Everywhere?

Aparantly, there is a local group who does similer things. They seem to jsut be getting started, but I think it looks interesting.
I want to braid my hair (probably with extentions), but I don't know where can I find salons that would do it and styles to choose from. Any help?

I would like to get my 1995 Subaru Legacy cleaned up something fierce.
No mere surface washing will suffice. I am looking for the full vacuming monty.
The kind of clean that gets the inside of the rails that slide the seat back and fourth clean.

I have already run a google search, but that is predictably cold and uninformative as to the quality, cost, and services offered by the companies.

I would greatly appreciate some warm personal feedback regarding your car detail experiences and recommendations, and also how much I should expect to pay for the removal of all those pesky pine needles.

Thank you for your time,

p.s. a place that won't laugh at me for having a wire hangar antenna would also be appreciated, but if they are good I can deal.
The University of Washington's botany greenhouse has loaned another corpse flower, named Husky, to Seattle's Volunteer Park Conservatory, and the plant, known for its putrid smell, has begun to bloom.

Husky began life as an almond-size seed in Sumatra, and now is 5 feet tall and weighs more than 80 pounds. The UW last year loaned a corpse flower named Waldo, which still resides at the conservatory.

Not in a plane, on my house!

Hardy har har har. Anyhoo, on to my question. I've got a bee hive about the size of a large cantaloupe on my house. They don't appear to be honey bees. They're short and predominantly black and fly like a honey bee (not all jerky and quick like a yellow jacket). Any one know of an organization that removes them for free? Like they keep them and study them or transfer them to their own hives or something? I know in other places I've lived such places exist, but Google search and Memories have been fruitless.

If not, any recommendations/warnings for a pest company to call on the East Side for removal of a bee hive?

EDIT: After calling a resource one of you fine folk referred me to, it appears that I have HORNETS on my house, and no body likes hornets. They said to spray it down at night with some hornet spray.
I've always gone to World Beads for- beading shit, but they're kind of overpriced.

Any suggestions for other bead stores either in West Seattle or near Downtown?

Or any other kind of place where I can buy leather (not suede) cord (I just want to put a ring on some cord)?

I need a cheap men's haircut. Are there any places that still offer a good cut for $10-15? After checking the memories, the only thing I've learned is to NOT go to Rudy's.

i am looking for daytrips or fun adventures that you can take strictly on public transportation. thank you! 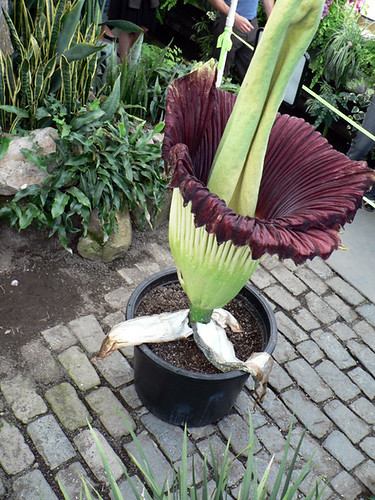 Better hurry. Husky will wilt before the weekend.
anyone know of a chinese place that will actually deliver to capitol hill?
how the %@!! can i find an apartment? i am going nuts here. even if i send my fiance out to look at a place, it is taken within minutes of my having made the viewing arrangement. he came quite early to some showing for a shoebox in first hill and there'd already been 3 or 4 people looking to get it (it was so ridiculous, 300 sq ft for 650, my christ).

i have to live in town since i refuse to drive in this town, but i don't care a whole lot about neighborhoods as long as there is decent bussing to the u district and as long as i am not living in capitol hill. and of course i refuse to share a house, unless it is but one other person. for some reason, even though this means pretty much anywhere within city limits is open season, all those places are taken instantly, even out in distant climes like shoreline.

how do people get an apartment without having to frantically reload craigslist to be the VERY FIRST CALLER on any given listing?

and what's with the lack of dishwashers?!

i'm just concerned because i cannot go look at anything, but yet if i send someone, it's already gone when they drive over there. and i have no pets and i am quiet.

i feel a bit lost in this apartment-hunting thing because i cannot be there to spend all day tootling up and down various districts.

edit: i'd be the only one living there, and i've explained to landlords that once my fiance views and finds it a reasonable (for me) size and price, all leasing arrangements can be taken care of that day (or hour, whatever.)

i know they've dealt with out-of-town move-ins having some else look over a place. this shouldn't be so darned absurd.

My Male adult cat just brought home a baby kitten about 2 or 3 weeks old...I need to know of somewhere I can take the kitten where it will be properly taken care of, I don't have any experience in taking care of newborn kittens

UPDATE::: I took the kitten to PetSmart and talked to the vet there, she told me the kitten seems like it's doing fairly well and is healthy. I have chosen to take care of it since I'm home all day, we're bottle feeding it the KMR kitten milk and it seems to be fine with it.

Where's the best place in town to get a gold ring resized and possibly engraved? I found http://www.seattlefastfixjewelry.com/ through google, etcetera, and am probably going to go there if no one has a better selection (or if others have horror stories!)

Has anyone been to a Washington state car auction?
I am looking for info on where they are, when they happen, what to expect. and how much money i should bring.

I tried searching google but all i got was a bunch of websites wanting me to give them money to look at cars they have already sold.

laundry across street, or larger washers ten blocks down at coin/op.

it's going through a very deep cleaning on my part on sunday or monday.
Collapse