Anybody know what is going on in the U-district right now? There's a helicopter that has been circling right above my apartment for the last 20 minutes.

How would one get to Port Angeles from Seattle using public transportation? The only bus I found takes forever by going around the sound, and I'm thinking bussing to Edmonds and then taking the ferry. But then what? What kind of bus would I take from Kingston for the fastest way?

i am going to a wedding in michigan in a couple weeks... and i need a dress.

however, i really want something that is not mall-like.

i moved here recently, and dont know of all the good areas to look around... however the one major problem i do have is that i am looking for stores that are more likely to carry sizes 12-16. a lot of the cute stores that i've come across from walking around definitely cater to those who are more petite...

i read in the archives on here about a store called venus that sounded interesting, but i couldn't find the phone number or store listing, so i am guessing it has closed since.

i would even consider a custom-made dress if the price is right.

thanks.
I'm now work within walking distance to Pike Place Market and I know there are a lot of different places to grab lunch but I always seem to go to the same places: Beecher's, the Crumpet Shop, Mee Sum Pastries and Mr. D's Greek Delicacies. Since

i_know_nuffin can you please recommend to me other places in the Market that are great for lunch? Also if you have a recommendation for a place what's your favorite 'dish' to order there?

According to this article, waitstaff in Washington earn minimum wage ($7.63/hr) plus tips.

Now I know why service is so bad here.

EDIT: An honorary "A+" to all the waitstaff that post impassioned responses.

I was just walking to Cocoa Banana for a Mango smoothy (yum) when I noticed about 2000 police and emergancy vehicles converging on 1st and Columbia. You could see a dude sitting on the ledge of the norton building (About 4 stories up?) from second avenue. Avoid this area like the plague, it's all messed up right now.

Does anyone know what the deal is with all of the small boats camped out near the 520 bridge? It looks like they're all fishing -- did the season just start up?
I am told that tartar sauce is popularly consumed with fries in Seattle, WA. I haven't encountered this myself though. Where can I find an eating establishment that serves fries with tartar sauce? Preferably a place with good beer too.

Bonus points if they are seasoned, thick-cut fries.

Bonus bonus points if this is in or near the U-District.

Edit: Thanks for all the suggestions. Ivar's looked good, but they don't have fries on the (online) menu, except as part of fish'n'chips. I ended up going to Red Mill Burgers in Phinney. Their fries are plain (not seasoned nor thick cut), but they are very decent. A small tub of tartar sauce costs 23 cents. Perfect! They don't have beer though. Belgian Frites sounds wonderful, I must remember them next time I have a late night on the Hill.

Can any of you fine folks suggest a downtown salon where I can turn my dark roots white without all my hair falling out? It's gotten to a length where I just don't trust my platinum hued hair to just anyone anymore! 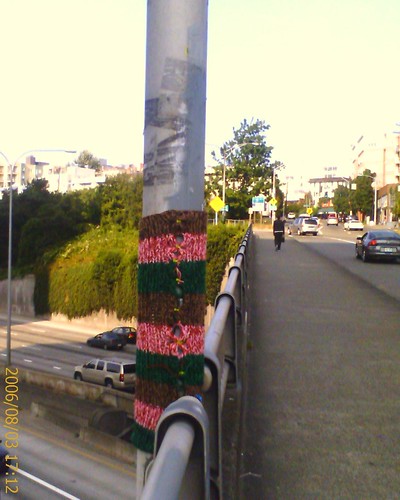 Someone appears to be on their own personal mission to beautify the city with their KNITTING. Have you seen other examples of this rogue artist?

So I'd like to head to the coast for the day. What's the closest, nicest, cleanest public beach?

We have need for a few support folks at F5 Networks. For more information on the position please go here and follow the directions for submitting an application. If you have any questions, feel free to ask!

I am seriously jonesing for pierogies, but neither Google nor the memories nor Whitepages.com can tell me where I can find them in the greater Seattle area. The one place I found -- the Polish Home restaurant -- is closed for the summer.

So. Anyone know of anyplace where I can get my Polish dumpling fix tomorrow night?
Collapse