In the gutter right outside City Market at Bellevue and Olive, a few minutes ago. It was empty. Green canvas shoulder bag, military style with mysterious square hole cut in the side. Personalized flap with the motto "MAKE GREAT THINGS" and "LE CHAMP". Lookit, I took a pic. 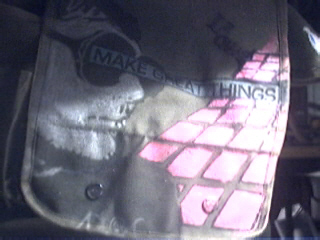 If no one claims it, I will obliterate the personalizations and make it miiiine. Because it is a cool fucking bag.

Also I think I saw

free stuff update: it's starting to look like the cream of the crap, so i don't want to get anyones hopes up. THANK YOU FOR GETTING RID OF MY ENORMOUS AMOUNT OF STUFF!

and you guys are lousy tippers. :) but what else would i expect on a free event?
Hi everyone, I'm planning a visit to seattle next year. Are there any cheap places to stay other than the youth hostels? How about in Tacoma? Also, is there a good place to download photos of Seattle for non-commercial purposes? Thanks.

I'm shy to do this, but craigslist wasn't working out for me. I'm a straight(ish?!) female looking for a platonic friendship with a funky woman. I'm young, but I'm mature, and I'm straightedge. Not in the sense of the sub-culture, I just don't use, drink or smoke, that's all. My style is anything funky (funk, punk, goth and lolita) and I enjoy rockabilly, punk, industrial and goth music. I'm pretty plain right now, but I'm making my transformation. I moved here from Florida to be with my boyfriend. I grew up in Northern Michigan. I really love this city, and I enjoy being with my boyfriend and playing Warcraft all the time (my server is Cenarion Circle) but I have the biggest urge to have a girlfriend to internet shop with and watch anime. I don't have anything too specific in mind, just somebody open to new things. My most stringent requirements are that my friends be mature and smart. If you consider yourself that, and you're not a heavy smoker/drinker, I would love to meet you up for coffee sometime. Somebody to show me around to the thrift stores of seattle would be great too. I'm not looking to date, just some really fun friends.

Also, Sakura-con is coming up and I'm curious what people's plans are for that. I'm planning on volunteering and hopefully I'll get some fashion advice (my own sense is pretty so-so) that would lead me to a decision on a costume. Or even a sewing friend to help me make one!

Where do you shop for groceries?

Also, which place is cheapest for groceries, aside from Grocery Outlet?

Hmm...so does anyone know where I could rent a newish video camera for the next few weeks?
Collapse