Hi! I am relocating to the area with my partner and am a bit scared given that we don't know anyone in Seattle or Washington, for that matter.

I would like to start job hunting before I arrive and am eager for suggestions on the best places to work and places to avoid. I have a grad degree in business and my background includes academia, nonprofit and domestic corporate/technical. My 15+ years of experience has been a real asset, but everyone is brilliant in Seattle so I am sure competition is fierce! Your help and advice about executive placement firms, excellent employers and places to avoid working would be a huge help and keep me from begging for change on the streets. :) 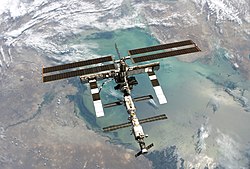 So the International Space Station is currently orbiting the Earth at an altitude of 220 miles. It orbits the earth every 92 minutes.

On the news (Seattle) last night, meteorologist Steve Poole said that since we will have a clear sky this morning, the International Space Station will be visible at around 6:30AM. Just look directly up and you will see a bright object going from west to east. This is just for those in the Puget Sound area, I'm assuming.

So, if you're reading this, it'll come up in a little more than an hour

The Seattle Lesbian & Gay Chorus is now accepting new members for its dynamic June concert, "Summer in the City." We welcome musicians of all skill levels and, in keeping with our charter, we welcome people of all genders and sexualities. Our auditions are fun and low-stress, and will be held on Saturday, February 18, from 4:00 PM to 8:00 PM. Call to set up an audition with Seattle's popular mixed-voice group: (206) 860-SLGC. Learn more about us at http://www.slgc.org. To join our announcement-only mailing list for more audition and concert notices, sign up at http://groups.yahoo.com/group/slgc-announce.
So last night, walking past the club Kingcora on Pine, on our way to a play, my friend Anna and I witnessed a little scuffle between the bouncer and a drunken homeless man. The bouncer was shoving the homeless guy out of the bar. He shoved the man (who was already drunk and none too steady) so hard that he fell backward, and landed a few feet away on the concrete sidewalk. When his skull hit the pavement it sounded like a bowling ball. The bouncer went back in the club without even checking to see if the homeless man was okay.

He wasn't. He lost consciousness for a couple of minutes and blood started oozing from his ears and pooling on the concrete below. Normally I'm totally self-centered and aloof and can't be bothered with other people's problems, but, I don't know, call me crazy, but I'm of a mind that when someone is UNCONSCIOUS AND BLEEDING, you're kind of morally obligated to stop and assist. My friend Anna dialed 911. We waited for help. We stayed when the fire department got there, and for the paramedics, and to give a statement to the police. During all of this time, no one from the bar came out to see if the guy was okay. (He did end up regaining consciousness.) When the police asked Anna if she could identify the bouncer who did the shoving, the bouncer called her a "fucking bitch."

I don't mean this as an incendiary statement or a cautionary tale. I just want to voice my disgust at the way the homeless man was treated in the first place and the lack of compassion that was shown to him. I don't know what went on between he and the bouncer before we got there, but I don't think anything he could have said or did really justifies the treatment he got. And I want to give props to my friend Anna for doing the right thing, and for stopping to help even though she otherwise was only repaid with an insult.

On the brighter side, we made it to the play, which is called Capitol Hill High, showing through February 25th at the Capitol Hills Arts Center. It is a really funny satire about the hipster culture, and you should all go see it. That's all.

1) I barely escaped stopped traffic on 3rd Avenue and Pike when a protest march came barreling down the block, driving everything to a halt. What was the protest about?

2) Does anyone know how to find monthly parking around Downtown at any place right now, that doesn't have a huge waiting list?

Assuming the whole family is over twenty-one... We're playing tonight with Tennis Pro and We Wrote the Book on Connectors. Doors at 9 and Manplus is playing first. It should be good times, good times indeed.

Also, I'll be selling merch and if you mention the fact that you read my little community post here I'll give you a free EP (I've got like 10 left, they're going back into the studio so we're trying to get rid of these).

p.s. (cross posted in 'seattleindie' and 'localxshows') - I totally just joined this community, by way of introduction I manage Manplus. There are songs that you can listen to and download on their webpage and myspace.

If you're so inclined to come to the show, I'll be with the merch and giving away EPs to people who mention the LJ postings.

What's a store that you know, for sure, sells Shrinky Dink?

I know there are a million stores that would/should sell it, but I'd really rather not go from store to store this weekend.

EDIT: Thanks everyone! I found some at Top Ten Toys.
Collapse