I just got back into town from a weekend in san diego, and I wanted to commend my new pet sitter, alexis edwards from emerald city critter care. she did a fantastic job with my kitten, who I was completely anxious about leaving alone for the first time. she's extremely personable, and obviously good with all types of animals. her rates are reasonable and she's very efficient, even down to the minute by minute log that she keeps of her visits. I would absolutely recommend her services, particularly in the queen anne area.

If you are in tacoma and going torwards seattle, i5 is closed. State trooper shot another black person. (ok, I don't know if they are black... just taking a guess.)

The LJ Seattle community will now begin to be boring (for me) as legislated by our illustrious government:

Annoying someone via the Internet is now a federal crime.

In other words, it's OK to flame someone on a mailing list or in a blog as long as you do it under your real name. Thank Congress for small favors, I guess.

Hi there, I'm hoping someone may have some help for me.

I'm looking to rent a tux. One of those powder blue numbers with the ruffles and shit. Like this dude is wearing: 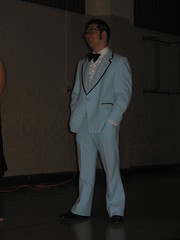 Is there anywhere in Seattle that might actually still stock these? Perhaps a costume store?

Thanks for any help.

anyone else having problems dialing out to Qwest or Cingular cell phones in the area? I called Qwest and they have an automated recording that says there is some sort of network problem. I have Verizon and I can call anyone except for Qwest and Cingular numbers. I can't reach Qwest/Cingular numbers from a land line or ip-relay either. :( WHAT IS GOING ON??

By tallying clicks on our Web site, we now chart the most read stories in the online edition of The Seattle Times. Software then sorts the tens of thousands of stories for 2005 and ranks them. Not by importance, impact or poetic lyricism, but by which stories compelled the most people to put finger to mouse, click, open and, presumably, read.

The story last summer about the man who died from a perforated colon while having sex with a horse in Enumclaw was by far the year's most read article. [...] So much so, a case can be made that the articles on horse sex are the most widely read material this paper has published in its 109-year history.

http://seattletimes.nwsource.com/html/localnews/2002711400_danny30.html
Washington's former Senate Republican leader on Monday said he will reverse himself and vote for a gay civil rights bill, all but assuring its passage this year after two decades of debate and narrow defeats.

The measure would add "sexual orientation" to a state law that already bans discrimination in housing, employment and insurance based on race, gender, age, disability, religion, marital status and other factors.

"I've had a number of conversations over the past year that have led me to more fully understand the level of discrimination against gays and lesbians, and I now find it is both appropriate and necessary for the state to make it clear that this is not acceptable," Finkbeiner, R-Kirkland, said in a written statement obtained by The Associated Press before it was widely released.

CLITORAL MASS! a bike ride for WOMEN AND TRANS FOLKS of all ages, stages and identifications.


We're back for another round! Last month was a total success and this month's ride will be bigger and better. Please invite your friends to join us in celebrating our second ride.

Who we are... a community of women and trans people in Seattle working to cultivate a more welcoming environment for cyclistst in these underrepresented communities.

Any Questions? Email Seattleclitoralmass@gmail.com
See you there, rain, (snow,) or shine!

Those of you who work in pioneer square or downtown, how long does it take you to get back to where you live, and which district do you live in? I'm going to move to Seattle from Lynnwood real soon now. Speaking of which, I'm trying to find someone to take over the rest of my lease on a 1br in lynnwood.

Can anyone give me some new music that will kill even the foulest mood?
Ben Lee seems to do this for me coupled with about a 3-mile walk.
But this mood is extra-strong and I need some POWERFUL stuff.

Give me some endorphins!!!!!

Okay! Who dumped a mattress at my bus stop - now it moved right next to my buidling. I know it was you!

Greetings all, I am moving back to Seattle at the end of the month after being gone for nearly two years. Are there any particular events that happen regularly around the city that you'd recommend I check out? By events I mean things like the free movie night at the Sunset in Ballard that happens once a week etc. When I lived in Seattle I used to attend a gay men's weekly movie group that was open to the public. Every week they'd meet at a different theater and we'd get discount tickets to whatever movie was chosen. The cheaper the better. What are some of the things you attend and enjoy?
I don't think this has been posted yet, but if it has feel free to delete.

The Seattle Pillow Fight is attempting to break the Guiness record for world's largest pillow fight with a goal of 4,000+ people attending. The date is undetermined but it will be held in May 2006.
Does Seattle have a monthly LJ Meetup? Or any other kind of informal LJ get-together?

Edit: It does in fact have a scheduled meetup on meetup.com! (Thanks,

The next one is:

You should all come!

Does anyone know anything about OK Cafe? Someone at this coffeehouse in Denver is asking about it. It didn't show up on a Google search.
Collapse